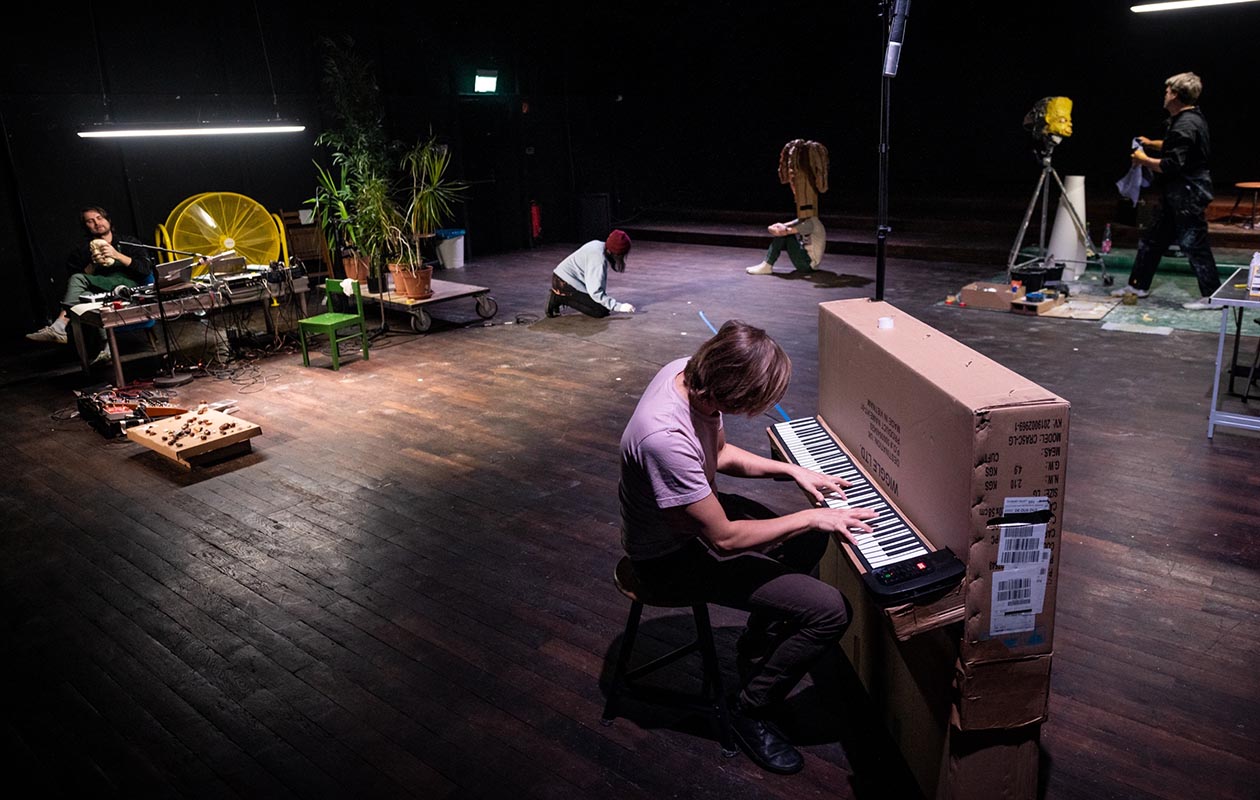 If you walk along the village main street, you barely see the villagers’ homes. The one-story, gabled buildings remain concealed behind an opaque fence in green, densely overgrown yards. The fence snakes along the street and varies its coats of paint, varying in height and state of preservation, yet always fulfilling its purpose, to shield the inner workings within the yards from strangers’ gazes. To see the houses and their residents, one has to pass through a small door in the fence, into each respective yard…

Lustdorf is a seaside resort on the Ukrainian Black Sea Coast. The subbotnik group have abducted their audiences there time and again, during their musical-theatrical voyages. Their eponymous live audio drama already premiered in 2013. In it, two boys spend the last summer holidays of their childhood. It is 1992, the USSR has collapsed, a new era dawns. The three-month holiday becomes a grand narrative about the end of things how they once were, and the departure for new conditions.

subbotnik travelled to this small place together in 2016, developing their work “Geh hin, ich weiß nicht wohin – bring das, ich weiß nicht was” (“Go there, I don’t know where – bring this, I don’t know what”) from this. In the past year, author, performer, and subbotnik co-founder Oleg Zhukov was a guest in Lustdorf again. From this re-encounter sprang this newest reworking. In a mixture of performance and installation with music and video, subbotnik recount the tale of a house through different times, from the different generations of its inhabitants and the intertwining of their shared stories. The house with its memories and imaginary spaces becomes the narrative centre. In an open space, a community emerges and disintegrates.

Haus / Doma / Lustdorf links an artistic handling of the Ukrainian Lustdorf to a current subbotnik project: A walk-in installation that will develop over the coming three years, which will simultaneously serve as a workshop, a stage, a living room, a showroom, and an artwork. This installational house traverses various stages and conditions: from a utopian “dream house” as a shell to try various forms of communal imagining to a walk-in object that could be treated as an heirloom or an artwork.

to the trailer on subbotnik-theater.de