„No happy end and sometimes many endings.“ 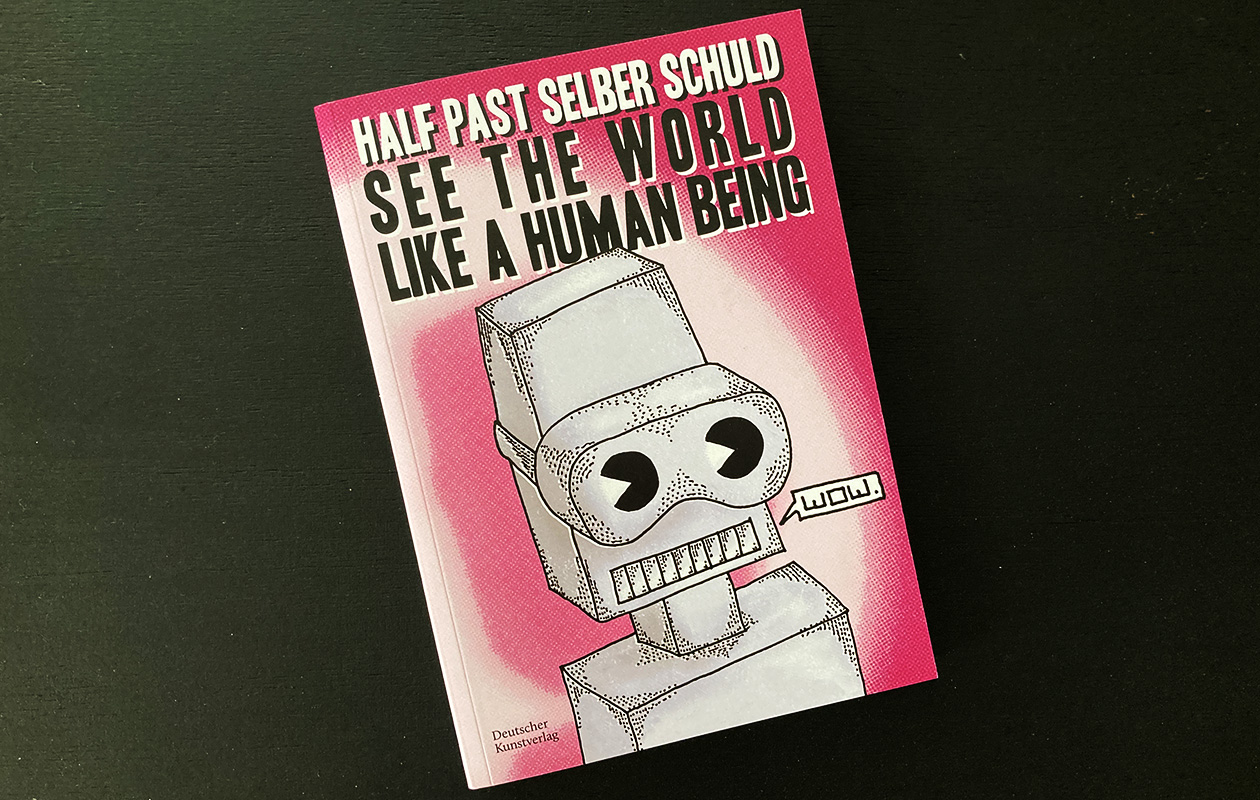 Finally it’s here! A book by and about the Düsseldorf group half past selber schuld and their ingenious stage comics: See The World Like A Human Being. FFT dramaturge Christoph Rech has contributed a text, an ode to inability:

„The world needs heroes. Superheroes. They are beautiful, strong, brave, noble. They help, fight, save. And what a tableau of heroes offer half past selber schuld: a commissioner, a pope, a police dog, Pinocchio, a world conqueror, extraterrestrians, inner-terrestrians. Colorful, bright, flexible.

But stop! Something is wrong. Something is crooked, wobbly, distorted, flawed. If you look closely, it’s all deficits, atrophies, overgrown. And too much of everything, too precise, too obsessed. A glued surface painted for days, held up to the light for two seconds in the exit. A small figure, a prop, blinked and overlooked. No happy end and sometimes many endings. And then there are cheerful songs with scary lyrics. Or gloomy music with happy lines.

And suddenly it can be seen. It has a reason. „Though this be madness, yet there is method in ’t.“: Stand up for your postural damage! The failure is your strength- The deficit is your superpower! If you only look closely – a Justice League of crippled heroes! Dunkelziffer, Karl Klebebart, Polter – if they are able to do something, then they have failed over it. Inability, on the other hand, makes them heroes. And that’s why the stage comic – invented by half past selber schuld – is the heavenly kingdom of the incapable, the paradise of the unfulfilled in it’s perfect beauty. And probably that’s why Wonderland Inc. exists, the place to make people. Better.

And that’s why the theater is exactly the right platform for this stories, for half past selber schuld; this buffet of failure. Because Beckett said: Fail better!

And so you encouraged us: Own up to your postural defects!

After 17 years of half past selber schuld, after Downwards Bunker, The Last Mortal and Pinocchio Sanchez, I admit: You are my favourite crippled superheroes. Because you are really big theatre.“

Statement of Solidarity with the Ukrainian people